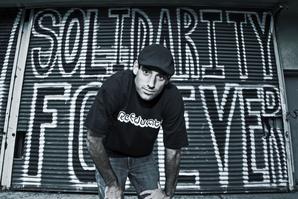 I am a listener who craves “behind the music” stories. I want to know about the creative process that built an album, I love insight into the daily lives of artists. Habits, routines, background, influences, interests, hidden talents. And fortunately, I’m pretty good friends with some of the most talented individuals I’ve ever met (fortunately and unfortunately: for all the inspiration, it’s also quite intimidating to be surrounded by such monsters). Especially when it comes to the art of rhyme. So when one of the most fascinating, brilliant human beings I know was ready to drop his solo debut, I was riddled with anticipation.

The preface that I’ll supply is this: Doron Lev is a multi-talented machine of expression. Some may know him as a drummer before seeing him MC. Others as a visual artist. And others as an educator. I count myself as fortunate to be privy to the entirety of his skill set. And on his first official release as UGLYBRAINE, “Ugly is the New Lovely,” he flexes more than a few of these talents.

In keeping with an appreciation for the background, the first thing you should know as the listener, is that the voice you’re hearing on these tracks also co-composed all of the music and played all of the percussion. I guess that’s information possibly culled from the liner notes, but frankly, that’s an entry point, not a footnote. There are a lot of rappers who make beats for themselves, but I can’t think of another rap vocalist writing music on this level. The amount of craftsmanship and care put into each record on this album is clear. The sonics are lush, the studio work matched by audio treatment on par. It’s a live band rap album that doesn’t feel like a “live band rap album.” There is a looseness to the music that is only achieved by instrumentalists on record, but it’s not jam-bandy or acoustic. The snares crack, the horns bring rise to hooks, the electronic elements are tasty and effective accents. The tempos range, as do the moods and instrumentation.

But it is indeed a rap album, so it’s the vocal performance and lyricism that ties everything together. And UGLYBRAINE does not leave you short on bars to sink your mind into. His content covers the academic historic, the musicological, the Hip Hop canonical, the battle shit, the weed smoker anthemic, the socially conscious political. UGLYBRAINE has more 16’s in his pocket that most MCs; the kind of cat that is always churning out bar-age. And when he sets his mind to the conceptual, he still brings the raw punchline style to the bigger picture. On “I95” he narrates the south to north coastal drive from Florida to NYC with rhymes that keep it visual, comedic and riveting with syallbic dexterity. In fact, “dexterity” might be the world that applies to this album most appropriately, across the board. As rap aficionado, I find myself rewinding lines and bumping certain songs on repeat: “Fuzzy Kangol,” “Just Like This” and “Born 2 Be” are rappers delights. UGZ spills slick rhymes all over these joints, while keeping the song strung together conceptually. He takes it to the realm of psychedelia on “Strange Opus” and to the NYC underground nightlife with “Loft Party.” For me, the jewel of this project is “Que Feo,” a rap-salsa song that allows UGLYBRAINE to marry his passion for Latin music with his through-the-roof skill as an MC. I can’t say I’ve ever heard a rapper dance on polyrhythms quite the way UGLYBRAINE gets busy on this joint, which could rock as hard in East Harlem as in the West Village, while peppering the lyrics with references and Spanish language that let you know he’s as deep in the musics of Cuba and Puerto Rico as he is in that of Hip Hop.

As a maturing rap fan and Hip Hop head, I crave substance in the music in which I invest time. To me, that means I need to be stirred emotionally, intellectually and soulfully. That said, sometimes I still fiend for rap to just bug out too: bars upon bar upon bars. “Ugly is the New Lovely” supplies the content for the rhyme appreciator and the music connoisseur. I wouldn’t go so far to say that it’s a political project, but there are references that illuminate UGLYBRAINE’s informed concerns. And I find myself yearning for the introspective/expository, but first albums should serve as an introduction and pique interest. This debut definitely gives you the chance to get to know UGZ the artist. And knowing how prolific he is, I anticipate many more chances in the near future to get to know him better through his records. -- R.D.

"Find beauty in the ugliness"

It is your first live performance here in Europe with your new album. How do you feel?

We are so happy to be here. It is really exciting. Since we released the record in October we’ve been playing around the States and now we are here. So the momentum seems to be building. It is a huge adventure.

You announced a video contest for artists in Zurich. How were the reactions?

The reactions were mixed. A lot of kids didn’t have time to submit because schools are in time of finals. But we’re going to continue because I think we had some interesting things and we started a little late. So in a month we may have some more entries. Hopefully it will pan into something still.

How did you get your bandmembers together?

First of all there are five of us. There is a community in New York and we found ourselves playing together. I have been really blessed because these guys are not only amazing friends but extremely talented, giving people. They just wanna make waves and that is what we are trying to do. It is a great jazz script that we play.

As you said in October you released the new album called “Ugly is the new lovely”. What does the title intend?

The most successful music seems to be the most prettiest and happiest; cookie cutter. There has to be a place for the dirtier and uglier thoughts. Ugly is the new lovely because we are bringing that raw, dirty funk and making it beautiful. You can find beauty in the ugliness.

How was the response to your album until now?

Surprisingly very positive, because we didn’t have a huge promoting machine behind it. But we have been written up and covered in different magazines. All these people have been supporting us. In addition we have this huge following where everyone knows each other and everyone is supporting each other, which is rare in New York. Because in this business there is so much competion. We are lucky to have the support of the hip hop and jazz community. It is great.

Do you write all of your songs on your own or together with the band while jam-sessions?

I write all of the lyrics and chords myself and with the bulk of the music I collaborate with a number of different producers. The main collaborator for my last album “Ugly is the new lovely” is named Mike Levy. Whatever idea I had, we fleshed it out and before I knew it, he had four-part horn arrangements and jazz harmonies in mind. He was able to take every little idea of mine and make something powerful in the studio.

How did the idea of mixing rap and jazz hit on?

My first rap performance was when I was ten years old. And I started playing the drums when I was twelve. All through the years, those two passions acted as different worlds. But because of recommendations from musicians I realized, I can drum and rap at the same time. So I started writing music specifically to feature those two things. And after many years of doing it at the same time, it’s become a unique niche, where I can improvise with both parts of my brain at once. That’s also why we call it Uglybraine.

You are in the middle of the tour. What was the most stunning moment for you until now?

We did an art warehouse party in New York. It was amazing, there were about 500 people in attendance. It’s where we see how the young people are reacting to the music, which they have never heard before. We’re getting really nasty musically so that art party dance seemed like a glimmer of what’s to come. This is huge for us.

Beside the jazz and rap tracks you are producing boom bap. Is it easier for you to rap to this rhythm or is it your favourite style?

I would say because of the era it is the most influential style so as my favourite rappers happened to be from that era. But now because we are in a world where so many different styles of music have become popular, we are pretending that there is no division. In our group we have members from all kind of different music styles. That’s the boom bap era that we represent, we are capturing the energy, because we are not living in the past. While bringing the elements from that era, that we are missing today. We are definitely trying to push the music forward.

What’s upcoming next? Do you have any special ideas in mind?

There is a lot coming out. I am now working on my next album with a collection of young producers and also with Mike Levy. And as soon as we get back we are playing some gigs and doing another warehouse party in Brooklyn. And then some of the Uglybraine members will be playing at the world famous Apollo in Harlem. So it is a big summer. We are really excited about what is happening. And I hope we will be back here very soon.